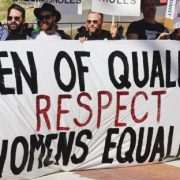 The tech industry is rallying around gender diversity and women aren’t the only ones excited about it.

It’s easy to forget that men have mothers, sisters, wives, and daughters who all play important roles in their lives and careers. In a recent article on Entrepreneur.com, Toby Southgate (CEO, Brand Union) challenged the false conclusion that men are indifferent to the suffering of professional women by directly citing his daughter’s bravery as his inspiration for championing women’s rights. He reminds male leaders that they have two ears and one mouth, and that they “should use them in that proportion.” Men in leadership positions benefit from pulling up a chair and listening to the state of affairs for women before they start making plans to enact change in their own workplaces.

Another leader who is inspired by the strong women in his family is Kfir Gavrieli, CEO of Tieks. Gavrieli has long been an ardent supporter of women in the workplace, and has consistently put his money where his mouth is. His sister, Dikla, is the president of the company, and under her leadership, Tieks has committed over $2.5 million dollars to Kiva, which loans money to women entrepreneurs who don’t have access to traditional banking systems. “We believe these women are a key in the broader fight against global poverty,” Gavrieli says, “and that there is no better way to have impact than to support the ingenuity and efforts of these women.”

Nicholas Ferroni, a Huffington Post blogger and high school teacher was namedone of 2016’s 100 Most Influential people for his tireless work in education, specifically towards the advancement of young women and girls. He currently advises his high school’s “Feminist Club” and recently posted on Twitter, “Male teachers are in an amazing position to be role models for the boys and to set a very high standard for the girls.” Amen to that!

In my book Leading Gracefully, I directly address the importance of engaging men as allies if we want to close the gender gap in organizations. Men still hold about 95% of CEO positions in Fortune 500 companies, so it goes without saying that they play an integral role in women’s advancement. If we want to see transformative change in the leadership and gender pay gap, we need men as allies, advocates, and partners. It’s easy to focus on the bad actors we hear about in the media and to paint all men with broad brushstrokes, but it’s important to remember that there are many male executives that understand the importance of women in leadership and are actively working to promote them.

My personal belief is that we must engage with our male allies in constructive ways if we are to move past gender bias, sexism, and discrimination. To achieve that goal, we need comprehensive culture change initiatives that bring awareness to things like unconscious gender bias, inclusive leadership and how to support women’s advancement. Also, engaging in respectful conversation and dialogue on these subjects can be a great way to invite men into the conversation in settings like women’s conferences and forums. But the first step is role modeling bold leadership by courageous male allies in vocalizing their support for investing in women! And that’s something we can all be encouraged by!