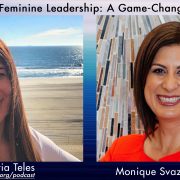 I recently had the chance to sit down and talk with the lovely Valerie Teles, host of the Fit for Joy Podcast. We had a wonderful chat about how women can lean into their natural, feminine strengths to find balance as leaders.  She was very curious about my own journey and how I embarked on my own self-discovery through practicing vulnerability, building self-confidence, and reclaiming my authentic Self. We spoke about the meaning of life, what it means to be strong, how we define Love, and a vision for a new world before we dove into a rich discussion about themes from Leading Gracefully: A Woman’s Guide to Confident, Authentic and Effective Leadership.

It’s not every day I get asked these types of questions because I’m typically talking to groups of women in corporate settings. I don’t usually get asked about my personal beliefs about Life, Love and God but I thought it was such a beautiful way to ground the conversation. One of the things people may not know about me is that I have a deeply spiritual side (not religious, more woo woo), which I tend to hide because it’s not “done” in business. But what I’m feeling more and more these days is that not only are these themes important to me and in my personal evolution but they are themes that are coming up a lot for many people. I am grateful for Valerie in creating the space for me to explore these questions and set them in the context of how women can more fully access feminine strengths to lead in their careers and personal lives.

Here’s some highlights from our interview:

-The Feminine Leadership Model and how to apply it in your everyday leadership (in life and your career!)

-Some real life examples from my personal leadership journey!

You can listen to the full interview here: https://fitforjoy.org/guests1/2020/7/5/monique-svazlian-tallon 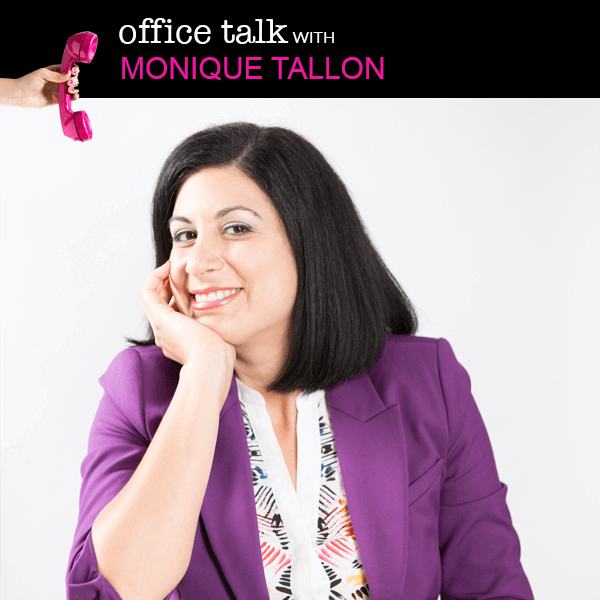 Had a great time speaking with my good friend, Annette Stepanian on her new podcast Office Talk. Annette is a lawyer that provides legal services to creative entrepreneurs, but is also passionate about helping people be their best selves, so it was awesome to talk about how women can be more of themselves in business and thrive. In this episode you’ll learn:

I recently had the pleasure of being featured on the Dose of Leadership podcast with Richard Reirson, who I can only describe as one of the men who “gets it.” He understands the need for more women in leadership because of the unique perspective they bring to the table, along with the great range of leadership skills that he thinks is much needed in the corporate world. I must admit it was refreshing to speak to someone who supports not only having more women at the top but an attitude that men can also learn a lot from women, especially about how to bring more heart into business. 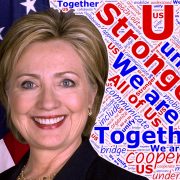 In December of 2015, Hillary Clinton had a 31-point advantage nationally to Bernie Sanders in our current primary election. In less than six months, she has gone from being pretty much guaranteed to be the Democratic nominee to barely squeaking by with her tight wins over Bernie in Iowa and Nevada. How did this happen? How could she have gone from being the favorite to now having to fight tooth and nail to stay ahead in the race? I’m sure her campaign is asking themselves the same questions. Nobody, and I mean nobody (including the Sanders campaign I’m sure) expected this to happen. Nobody expected TRUMP to be doing so well either. This has been, thus far, one of the most surprising (not to mention entertaining, thanks to CNN and Fox News) primary campaigns ever run in the United States.

I myself am a Bernie supporter for all the reasons we love Bernie — his authenticity, his passion, and the fact that he is calling for a political revolution in this country, which I think we really, really need. But I’m a woman, and I should vote for Hillary. The thing is, I want to vote for Hillary. She has more experience than God; her diplomatic resume is second to none. But like most people who have decided to go the Bernie route, we sense there is something that’s just not quite authentic about Hillary. There’s a certain ‘je ne sais quoi’ that’s hard to pinpoint, besides the fact that majority of her funding comes from Wall Street and she voted in favor of the Iraq war.

Here’s the thing about her: Hillary is unlikeable. I think it was a big problem for her in 2008, and it is still a problem. Unfortunately, Hillary is stuck in the double bind most women leaders find themselves in–if you talk too loud, you sound shrill and whiny. If you point your finger, you come off as too aggressive. Not to mention the fact that most people still equate the word leader with masculine traits. Our unconscious biases that get in the way don’t equate leadership to women–period. Now if that’s not a difficult wall to climb, I don’t know what is.

But she has climbed that wall and broken the glass ceiling. She’s running for President of the United States! That is a great achievement as is. But it’s not good enough. If she wants to get elected, she needs to be likeable. She needs to win the hearts of Americans young and old, black or white, gay or straight. And to do that, she needs to appeal to more voters in the way that Bernie appeals to young people. She needs to learn how to be a graceful leader (which is what I write about in my new book, Leading Gracefully: A Woman’s Guide to Confident, Authentic and Effective Leadership.)

Here are the top three things I think Hillary can do to gain back her lead in the polls:

1) Be Authentic: Whenever Hillary speaks or smiles, it feels really…polished. Like she has rehearsed that smile a thousand times. We know she has rehearsed those lines a thousand times, because when she’s asked a random question, she sounds less rehearsed and more like a normal human being. You have a feeling that you don’t quite know who Hillary Clinton really is. She’s a fantastic debater, I’ll give you that, she is quick on her feet and she does great under fire. Which makes her a great states-woman. But the problem with all of that is that we don’t want our politicians to act like politicians anymore. We want them to be people, like you and me. We want to feel like they relate with our problems, our worries, our deep desires. We want them to be more authentic. Which requires you to drop the mask and allow people to see your weaknesses. In one word, it takes vulnerability. But that’s a really hard thing for someone like Hillary Clinton, or any woman leader or female CEO for that matter. It goes back to the gender bias that women have to deal with all the time (and for men who think that is just an excuse, you try being a woman in the business or political arena for one day and then get back to me). We already have all the cards stacked against us, so we feel like we have to be that much more prepared for whatever is headed our way. It’s a tricky line to walk, but if more women, including Hillary Clinton, would dare to let down their guard and be vulnerable, it would open up the opportunity for connection. It would allow people to relate and feel safe. This is something Bernie does flawlessly and why I think he is so appealing to voters, especially young voters.

2) Communicate With More Empathy: Hillary Clinton talks like she cares about income inequality, racism, Wall Street corruption, etc., but you also get a sense that she cares about those things because they are hot button issues in this election. And they would buy votes. When Bernie talks about those same issues, you know he really cares. And it’s not only because he shouts and seems angry about the whole situation. It’s because he TRULY cares. You can hear it in his voice, you can see it in his body language, and you can also see it in his track record. The man has been walking his talk for 30 years. And while Clinton has fought hard for a lot of the same issues, she’s also wavered in her loyalty. She’s taken money from the big banks, she doesn’t want to bring back safeguards like Glass-Steagall (which her husband repealed and is what eventually led us to the 2008 global financial crash), and yes, she voted for the Iraq war. You get a sense that she doesn’t have the same type of empathy for the working man or for the single mom who’s living on minimum wage. And if she does care about all these things, then she needs to show it. Which goes back to #1 – communicating with empathy takes vulnerability. It takes telling the other person how you really feel, no matter how weak it makes you look. And that’s something I don’t think Hillary Clinton is very comfortable with.

3) Talk about the We, not the Me: If you listen to Hillary speak, it’s always about what “I” can do for you, what “I” will do when I’m president, what “I” believe we should do. When Bernie speaks, it is always about the WE. He has built his entire campaign on WE. He never talks about himself as being the Savior we are all waiting for. He talks about political revolution. Which refers to people working together to bring about change. His message and his vision are about bringing different people with diverse backgrounds together to work collaboratively. What Hillary represents is the old paradigm, a very top-down approach that everything from big companies to factories used to organize themselves. Well, maybe she didn’t get the memo, but in the 21st century and with the birth of the Internet, its all about collective movements of people working together toward a common cause. That’s what brought about the Arab Spring, or in this country Occupy Wall Street. It’s what people are craving for — they want their leaders to unite people around a common cause. In order to do that, you have to talk about the WE — the collective. We already elected our Savior…Barack Obama, and look how far that got us.

The qualities I listed above could be considered feminine traits, which I believe are the qualities people are looking for in their leaders today. And it’s something that more women leaders need to feel comfortable embracing in order to be likeable, authentic and effective, which will also eventually helps us close the gender gap. Emulating our male counterparts doesn’t have the same impact as leaning into our feminine strengths like vulnerability, empathy, care, intuition, and humility to name a few. I believe if Hillary Clinton develops the courage to embrace her feminine strengths, she could win the nomination by a landslide. Let’s see if she reads this article.

You can read this article on Huffington Post as well.