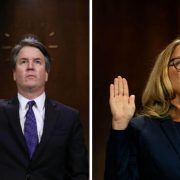 Nearly thirty years after the Anita Hill hearings, the nation and the world experienced collective de ja vu. What was supposed to be a shoe-in for a position on the highest court in the land of the free, quickly became a showcase of what the last gasps of patriarchy look like in this country. Acting angry, blameful, entitled we watched career politicians, many of whom are old enough to remember the Anita Hill hearings, deciding they didn’t give a damn about women, women’s rights, or the respect of women. They stubbornly defended their nominee, someone who has been accused of attempted rape, who himself showed no emotional self-control throughout his rageful testimony on Capitol Hill.

As I listened to these men, I kept thinking – what if they were woman? What if a woman sat in a chair and started yelling, pointing fingers, blaming and acting defensively? She would most certainly be called a liar, too emotional, a bitch, or self-serving. The double standards as it relates to gender and privilege, and in this case, white male privilege, was so obvious, most women just rolled their eyes and sighed. So typical.

Thirty years after the Anita Hill hearings, we must ask ourselves difficult questions. How far have we come as women, really? What have we achieved, really? And in the age of #metoo and #timesup, how will be navigate the newly birthed #himtoo movement barreling toward us like a tsunami gaining steam every time a sexual assaulter is elected to high office? Many of us have been watching and patiently waiting for the day when double standards no longer define our ability to be viewed as equals. At the rate we’re going, we might be waiting awhile.

We are standing in a pivotal turning point in the history of our nation. We are also standing in a pivotal moment for the feminist movement. There is a palpable sense that our relationship to power, privilege and patriarchy is shifting, We know in our hearts and in our bones that the traditional systems indoctrinated by our political, economic, societal and even religious institutions are no longer sound. They no longer serve us in a world that is increasingly interconnected, interdependent and under environmental attack. As men rise up to play the victim, to cry and act as if they are the assaulted instead of the assaulter, how will we as women react? Will we reclaim our true power and our voice to stand firmly in sisterhood and say enough is enough? Or will be meet rage with even more rage?

During this process, we also heard from Dr. Christine Blasey Ford who embodied for all of us what it means to reclaim her voice and speak truth to power. By owning her vulnerability and leaning into it as a strength, she showed us what is possible when we step into our true feminine power. Her poise, grace and clarity came through and most everyone who heard her thought she was credible and honest. She did not need to raise her voice, express anger, or play the victim to get her point across. She was rooted and grounded even in moments of weakness and grief.

As women, we have so much to be angry about. And we should continue to be angry when we need to be (as this moment warrants).

But what we also need to do is own our feminine power.

This type of power does not need to control others, dominate or obfuscate.

This power empowers others.

And by coming forward, Dr. Ford empowered a new generation of women who will learn how to reclaim their own voice and power in a new way.

We are quickly moving out of old, outdated models of leadership and power that seek to have power over or take power away from others and we are moving into ways of being that allow us to use it in a way that empowers others. We can apply this idea in all walks of our life, from the boardroom to the courtroom. And because I believe this power is innately wired in women, I think we are poised to lead the way, as Dr. Ford did. And that is the true silver lining in all of this.

The day will come when gender stereotypes and gender bias no longer define our ability to succeed. But first, we have to be the ones to break free from its chains.

I recently had the pleasure of being featured on the Dose of Leadership podcast with Richard Reirson, who I can only describe as one of the men who “gets it.” He understands the need for more women in leadership because of the unique perspective they bring to the table, along with the great range of leadership skills that he thinks is much needed in the corporate world. I must admit it was refreshing to speak to someone who supports not only having more women at the top but an attitude that men can also learn a lot from women, especially about how to bring more heart into business.