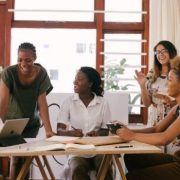 As we grapple with race and equity in America as DEI practitioners, we are all thinking about how to translate this work into the organizations we work with. Cultural diversity has become a buzz word that many of us strive to address but often times miss the mark because it can be too vague or too overwhelming to talk about. Simple stated, cultural diversity can be defined as a group of people from various racial backgrounds co-existing within a larger culture. In this piece, we’re going to look at what types of things we should be thinking about to increase racial diversity in the workplace particularly amongst Black people, so we can create richer, more diverse and inclusive environments and ultimately drive more impact for organizations through equal representation.

Click here to read the full article on Highest Path.