After avoiding the nine minute video of the murder of George Floyd for over a week, I decided to force myself to watch it, knowing it would forever scar my psyche. As I sat there watching an innocent man suffocate to death by brutal force at the hands of a police officer, so many thoughts and emotions came up for me, as I assume it must for any sentient being who watches it.

Officer Chauvin kept his knee on Floyd’s neck while he stared at onlookers screaming at him to stop, conscious of the fact he was being caught on video. It was almost as if he was flaunting his power to say, “See if you can stop me,” egged on by the sick, twisted gratification of being able to kill a man while others helplessly stood by. What type of hate inside an individual could lead to killing a man in such a violent way for no reason? I watched as the other officers did nothing to stop Chauvin from killing George Floyd as he called out for his mama with futility. The cold hearted indifference, inhumane violence and the complicity of it all was and is heartbreaking.

And then I felt the rage and anger surface in me along with a deep sadness about the low point we have arrived at in America. All of us live in a society where this type of murder is a regular occurrence – over 1000 people die by police shootings per year, committing 10% of homicides per year in the US. Police officers are more likely to use force, including lethal force, against Black, Latinx, Indigenous, and Asian people than against White people. We live in a society where innocent people can be killed on camera at the hands of those who are there to protect them with little to no justice being served. And of course all of this is built on a foundation of racism, bigotry and hate that goes back to the time this nation was born. The wounding is deep, it is profound, and it is systemic. 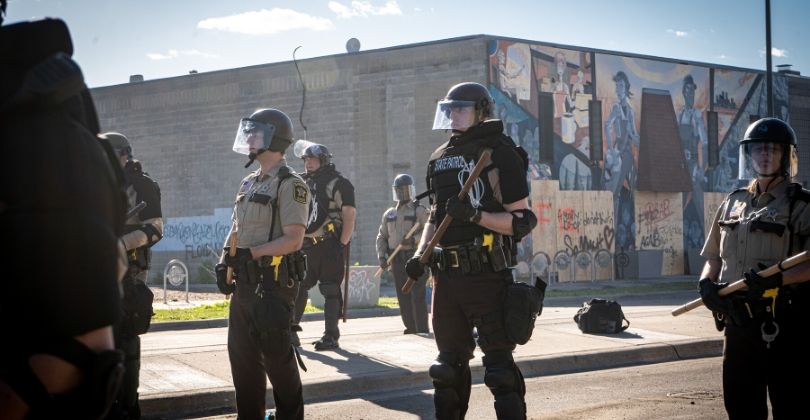 Therefore, it is no wonder that millions of people have been compelled to take to the streets to protest this outrageous act. It is understandable why people in other countries are taking to the streets in solidarity. We are currently witnessing the collective outpouring of people coming together to say enough is enough. We do not want to live in this type of society any longer. We do not agree to this behavior. We are demanding a new societal agreement – one that is based in human rights, moral decency and social justice.

So where will all this lead us? Clearly there is no direction or leadership from the President beside dog whistles and a call for military action. The authoritarian tendencies he has alluded to could very well lead us down a dark path. Democracy itself is under attack from those who have sworn to defend it. Never have we faced such an enemy from within, even in the darkest days of the Civil Rights movement. But the day of reckoning has come – and the people are making their will known.

However, systemic racism is not the only issue here. Racism intersects with economic inequality which intersects with gender discrimination which intersects with climate injustice. Which intersects with human rights of all vulnerable communities, such as Latinx, Transgender and Indigenous peoples. Capitalism itself is being tested as it has morphed into a system built to benefit 0.1% of the population, while the other 99.9% work to ensure the enrichment of the billionaire class. We might view the rioting, looting and vandalism through that lens – a collective middle finger, so to speak, to a system that is intended to keep most of us enslaved. 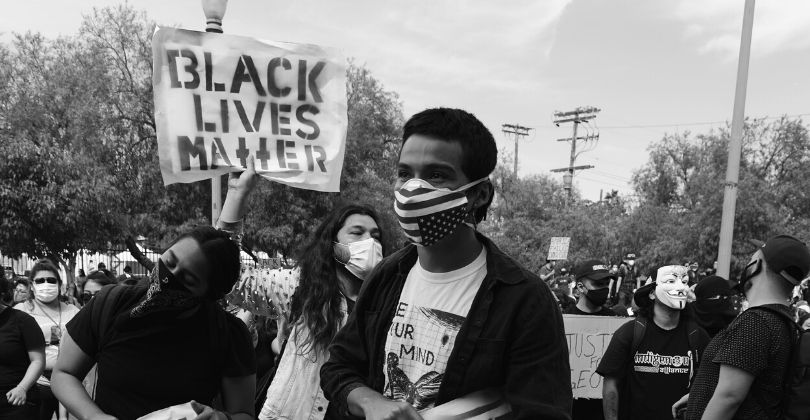 For decades this seemed to work without much push back or resistance from the working class. Many of us were and are still content to distract ourselves with consumerism, social media and celebrity news. Many of us are content to work our entire lives, pay our fair share of taxes to afford a nice house, drive a nice car and send our kids to overpriced universities. Many of us are fine working for companies that make billions each year, knowing full well that a few people at the top are making 1000 times more than we are and not paying taxes. A majority of people in the United States have been suffering from a lack of access to food, shelter or basic health care for decades, without anyone really doing anything about it.

Many of those people come from the same marginalized communities who are disproportionately targeted by militarized police and a prison industrial complex that basically amounts to modernized slavery. So perhaps what is enfolding in front of our eyes is the collapse of the entire system or as Cornell West recently stated, “We are witnessing America as a failed social experiment….it’s capitalist economy could not generate and deliver in such a way that people could live lives of decency.” If we are to demand justice, we must look to the root cause – a corrupt capitalistic system and fascist government which cares only about defending this corrupt system at all costs, and if necessary, with military force.

Learning Lessons from a Velvet Revolution

This moment reminds me of what took place only two years ago in a small country you’ve probably never heard of – Armenia. As a post-Soviet country, it has seen many trials and tribulations, including a massive earthquake that killed tens of thousands in 1988, a severe economic depression that took place after the fall of the USSR, a war with neighboring Azerbaijan, and a take-over by powerful, oligarchic regimes that lasted for nearly thirty years. Armenians are also all to familiar with experiencing deep racism and hatred – 1.5 million Armenians were massacred in the first genocide of the 20th century at the hands of the Ottoman Turks.

Although a small country, it has historically been supported by Russia. Putin has ensured that Armenia stay obedient and subservient to Russian forces. It gave rise to the oligarchs and corrupt officials that maintained power for decades. The people of Armenia tried several times to stage peaceful protests to no avail and resulted in lives lost. However, two years ago, a man named Nikol Pashinyan decided to step up and lead a non-violent revolution. He began walking in a town called Gyumri, 120 km away from the main capital of Yerevan. He walked through village streets and urged people to join him. And they did. By the time he reached the capital, thousands of people were walking beside him and they joined thousands more in Yerevan as people began to stage peaceful protests all around the city. 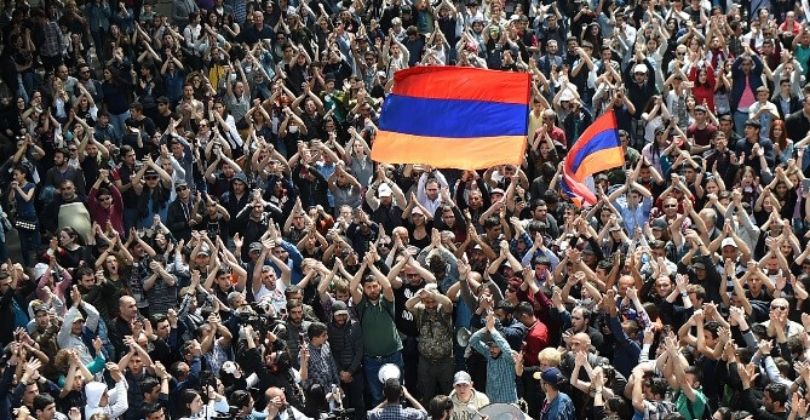 Over a period of two weeks, mothers came out and put their bodies on the line. They brought their babies and parked strollers to block intersections. Young musicians sat in the middle of streets and played music. At night, people banged pots and pans to show solidarity for the movement. People had nothing to lose and everything to gain and they stepped into their sovereignty and took back their power as a collective. Thousands put their bodies in front of tankers, police cars and prevented them from reaching crowds. At one point, they even captured Nikol and put him in jail, but that emboldened protestors even more. Within days, the Prime Minister resigned and the oligarchic regime came to an end.

The Time is Now to Take Back Our Power

It is time to design a new societal contract that is based on racial, climate, and economic justice. It is time to reimagine what our world might look like if it was rooted in values of love, compassion, kindness and tolerance. We must hold a vision of what our society could look like if we adhered to the notion that “all men are created equal,”  as it states so clearly in the Declaration of Independence. We must believe that change is imminent and that We the People will be the bringers of that change – not leaders who continuously fail to address these challenges in any meaningful way. It is up to the masses to continue to demand a new path forward and work tirelessly to bring about the healing necessary to jumpstart the process in the right way. We must continue to build on the non-violent vision of Martin King Luther Jr. and the activists of the Civil Rights movement, the Women’s Rights movement, the Gay Right’s movement, and the Transgender movement.

How we do that is up to us. Will we continue to only fight for justice or is there a different way? Can we achieve the same goal through non-violence – through dialogue, active listening, acknowledging the past, apologizing for our complicity and asking BIPOC communities for forgiveness? Could these acts be enough to jumpstart the healing that is so necessary for us to move forward? How can those with privilege lead the way, initiate those discussions and engage more actively instead of putting the burden of fighting for justice on those that have been disproportionately affected by racism, bigotry and police brutality? These are the questions all of us should be pondering and taking steps to initiate within our  communities. Once the fires, tear gas and pepper spray have subsided, we must roll up our sleeves and get to work. It will require everyone’s active engagement – our artists, healers, the indigenous peoples, musicians and our religious leaders to unite us around a common cause. We can and must work together, leading our own way, lighting our own path. The time is now.

Working from Home is Here to Stay. 7 Tips to Ensure Women in the Workplace ...